Military re-enactors have gathered today for a Pageant of History with Military Re-enactors portraying historic characters from the English Civil War period right up until the Second World War. All of this has been organised by The Royal Welsh Regiment as part of its commemorations of the 70th Anniversary of Victory in Europe Day.

Victory in Europe, otherwise known as V-E Day, was the public holiday celebrated on 8th May 1945 to mark the formal acceptance by the Allies of Nazi Germany’s unconditional surrender of its armed forces, 8th May 1945.

Re-enactors will be on-site at Cardiff Castle all of this weekend to tell people all about the life of the Welsh soldier throughout history. There are plenty of family-friendly opportunities to handle authentic artefacts from the past, as well as to learn about different uniforms. 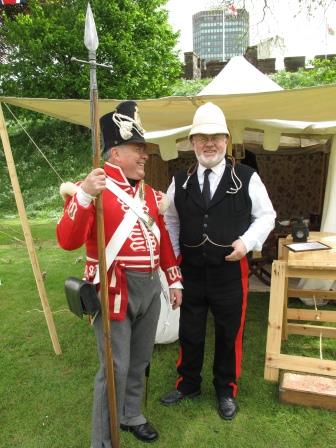 As the Firing Line Curator, my favourite bit is the opportunity to get a glimpse into the living conditions of soldiers during different periods. These re-enactors have suffered for the event as many of their tents nearly fell down in the winds last night.Although I did spot a little more luxury in the tent of on-site surgeon, Roger Morgan…..I suspect his tent would be ideal for a contemporary glamping trip; it even comes equipped with a rather glamorous on-site commode!

There is still plenty of time to come along and find out more as the re-enactors are also on-site at the Castle tomorrow (Sunday 10th May). If you come tomorrow there will be a celebratory V-E day picnic, what’s not to like?!

Soldiers of The Royal Welsh are also here telling people about what it takes to be a modern soldier, showing equipment used by the contemporary soldier. So come along, it is well worth the visit.