A Short History of 1st The Queen’s Dragoon Guards 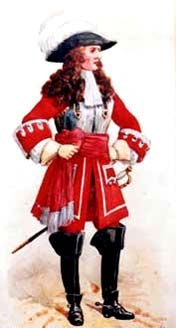 On accession of King James II to the throne on the 6th February, 1685, the regular army in England consisted of three troops of Life Guards, a regiment of Dragoons, two regiments of Foot Guards and five regiments of Infantry of the Line, which, with the garrison in regular pay amounted to 8,000 men.

Few months only had lapsed before the army was called upon to protect the King from the designs of disaffected subjects, who were excited to rebellion by, James Duke of Monmouth, natural son of King Charles II. The Duke of Monmouth sailed from Holland in the beginning of June, with three ships laden with arms and ammunition and on the 11th of that month landed with a small body of followers at Lyme, in Dorsetshire, where he set up his standard and invited the country people to join him. The King took active measures for opposing Monmouth’s designs and troops of Horse and Dragoons were raised in almost every part of the kingdom, which were subsequently formed into regiments.

Two of the regiments raised on this occasion were originally raised under the names of their Colonels, the 1st King’s Dragoon Guards as Lanier’s or 2nd Queen’s Regiment of Horse, and the Queen’s Bays as Peterborough’s or 3rd Regiment of Horse. The first duty of Lanier’s new regiment was to escort the luckless Monmouth as a prisoner from Winchester back to London after the battle of Sedgemoor (1685). Regiments of Horse rode large strong horses and were not expected to fight dismounted. Both regiments fought at the battles of the Boyne and Aughrim (1690).

Lanier’s Horse fought under Marlborough at the Battles of Blenheim (1704) and Ramillies (1706), where they captured standards and drums from the French. The regiment also fought at Oudenarde (1708) and Malplaquet (1709). Peterborough’s Horse fought in Portugal and overthrew two French regiments in a famous charge at the battle of Almanza (1707). In 1714 Lanier’s Horse suffered it’s first change of name from the Queen’s Regiment of Horse to that of the 2nd King’s Regiment of Horse (in which William Pitt, later Prime Minister and Earl of Chatham, was commissioned as a cornet in 1731).

The King’s Regiment of Horse fought at Dettingen (1743) under General Honeywood, Captain Browne wrote an account of the battle:

For several hours we stood the cannonading of the enemy, from several batteries they had erected, which commanded the line of march, so as not only to annoy us but frequently went beyond us…..and as soon as men or horses was killed they closed up again, and at the same time we could see that our cannon played upon them, they set up a gallop in great disorder. The Gens-Arms (presumably the Gendarmes, a French Household Cavalry Regiment) the best troops of France advanced to attack us, and a battery of their cannon flanked us: upon their advance to attack General Honeywood’s and Ligonier’s regiments we marched forward and met them sword in hand; at the same time their cannon ceased and they flanked us on the left with their Foot; then we engaged and not only received but returned their fire: the balls flew around like hail, and then we cut into their ranks and they into ours. Our Squadron suffered the most, we being on the left flank.

I did not receive the least hurt, providence greatly favoured me that as there was an engagement I was in the thickest of it and was my kind protector, but had not the English Foot come to our relive we had been all cut to pieces, The Gens-Arms being nine deep and we but three, after which we rallyed again and marched up to attack them again, but before we was ordered to they had retired. We had nothing to eat or drink, and quenched our thirst by the rain that fell on our hats, and we had nothing at all for our horses. 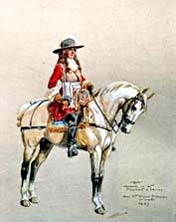 In 1746 the Government, determined to save money, decided to reduce both regiments from the status of Horse (who were better paid) to that of Dragoons (who would cost less). There was such and outcry that eventually the 2nd King’s Regiment of Horse became the 1st or King’s Regiment of Dragoon Guards and the 3rd Regiment of Horse became the 2nd Queens, Regiment of Dragoon Guards.
The Seven Years War brought both regiment together at the Battle of Corbach (1760), where a desperate charge by the KDG was said to have saved the army. In 1767 the custom of using only bay- coloured horses in the 2nd (Queens) Dragoon Guards was recognised by a change of name to the Queen’s Bays (unofficial title).

At the battle of Warburg (1760) both the KDG and the Bays followed the Marquis of Granby in a celebrated charge, where the Marquess lost his wig, giving rise to the expression ‘going at it bald headed’. At the battle of Willems (1762) the Bays captured several French regiments by ‘charging the flying foe sword in hand’.

In 1815 the KDG were at Waterloo and the The British Cavalry played a decisive part in the Battle. Thirty Two regiments were involved formed into 11 Cavalry Brigades. The King’s Dragoon Guards formed part of The Household Brigade (Lord Edward Somerset) along with the 1st & 2nd Life Guards and The Royal Horse Guards (The Blues) and made up 40% of its strength. The Supreme Commander of the Allied Cavalry was Lord Paget, The Earl of Uxbridge.

At about half past two, at the height of the battle the Duke of Wellington launched the Household Brigade against the reputedly invincible French Cuirassiers, notably the 7th and 12th Regiments of Travers’ Brigade, who threatened to break through the centre of the British position. The Cuirassiers, incidentally were regarded as the cream of the French Cavalry, well armed with a sabre, a full six inches longer that the British pattern, musket and pistol, well protected about the body with breast and back plates, and veterans of many campaigns.

The King’s Dragoon Guards formed the left front of the Brigade and their counter charge against the Cuirassiers continued onto the position of the 5th Regiment d’infanterie, who were routed with staggering losses of their numbers. This awe inspiring charge, carried out in full view of both sides, put new heart into the British Infantry and may be considered the turning point of the battle.

When the Household Brigade reformed, the Commander in Chief rode to the head of the KDG Squadron and personally thanked them for their Dash and Gallantry. During the afternoon the Cavalry was exposed to heavy artillery fire and suffered casualties. They were moreover called upon to advance against a close column of the enemy’s Cavalry which it attacked with great spirit causing them to retire in confusion. Wellington now decided the moment had come to make a general attack on the wilting French Army. In this last attack, the regiment overthrew all that opposed its advance and particularly distinguished itself in the final engagement.

The Regiments losses in killed and wounded during the battle were the highest ever recorded. Tradition holds that the surviving Officers and Sergeants sat down together and to share their meal on the evening of the battle. The KDG charged 13 times during the battle although they started the day with a strength of 570 sabres, by the end of it there were less than 100 men left of the Household Cavalry Brigade on the field, of which probably not more than 30 were KDG. Captain Naylor of the KDG who as a junior captain ended the day commanding the entire Cavalry Brigade. In memory of that evening the officers and sergeants of 1st The Queen’s Dragoon Guards dine together in the Sergeant’s Mess on each 18th June. 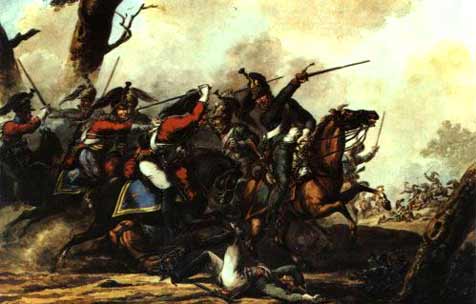 From 1818 to 1838 both regiments reverted to their traditional role of maintaining law and order on each side of the Irish Sea. In 1838 the KDG were sent to assist in the suppression of the French Canadians in Lower Canada, but thanks to the leadership of a most enlightened Colonel, George Cathcart, they were much respected , and popular with all Canadians.

When the Indian Mutiny broke out in 1857 both the KDG and the Bays were ordered to India. On arrival at Calcutta late in November, The Bays were informed that they were to go to Allahabad with the utmost speed to join Hope Grant’s Cavalry Division in Sir Colin Campbell’s force. This meant a 500 mile journey, 400 miles of entailed marching across India with their newly issued horses. Captain Seymour wrote:

Very hard marching we shall have had, as the last ten days are forced marches. We are marching with our heavy baggage, yet we have no less than 2,000 paid camp followers! We march at 4am, always in the dark for two hours, and this adds much to the ordinary confusion of a march. We sleep in our tents, but our tents are never up with the regiment for some time after we reach our new camping ground. It is all very rough I assure you… our Officers have been greatly plagued with their native servants, as owing to the times one is obliged to pay them in advance. Nearly all those engaged in Calcutta have bolted…I fortunately did not engage one there, none of mine have left me… my Establishment is complete.

From the end of January onwards the Bays were regularly employed in minor mopping up operations which characterized the later stages of the Mutiny. In March they took part in the siege of Lucknow Captain Seymour wrote:

We came on bodies of Cavalry and Infantry of the enemy. Bays where ordered to the front to charge and persue! Away we went as hard as possible, Major Smith and I leading. We did not stop for three miles, cutting down and pursuing the mutineers right up to Lucknow, and across the river. We are told the most gallant. smartest, though somewhat rash thing that was done before Lucknow. 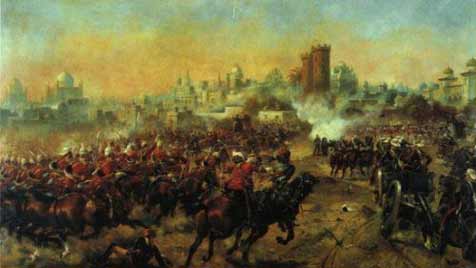 Charge of the Queens Bays at Lucknow

The KDG in the meantime on arrival in Calcutta found that there were only enough horses to mount one heavy cavalry regiment. The KDG’s were considered to be ‘the heaviest of the heavy’s’ at the time, so there was to be some difficulty in obtaining suitable mounts for them. The KDG were ordered down to Madras. In 1860 the British and French Governments went to war with China for the third time to secure satisfactory trading facilities. The KDG were stationed at Bangalore in the Madras Presidency and were ordered to China. They took part in the storming of the Taku Forts, and the capture of Pekin. Trooper Phipps was detailed to escort some envoys into Chinese lines, where the whole party was promptly imprisoned. Phipps was bound, along with the other captives, and tortured. Though he finally died his outstanding cheerfulness and courage in extreme adversity helped to keep hope alive among the captives, and even won the admiration of the Chinese guards.

The regimental badge of the Queen’s Bays has always been the word ‘Bays’ surrounded by a wreath of laurel and surmounted by a crown. In 1896 the Emperor Franz Josef of Austria became Colonel-in Chief of the KDG and granted the privilege of wearing the Hapsburg double headed eagle, which remains the cap badge of the combined regiment to this day. (In 1915, because of anti-Austrian feeling during WW1, The KDG reverted to the Garter Star, and it was not until 1937 that the Hapsburg Eagle was restored.) 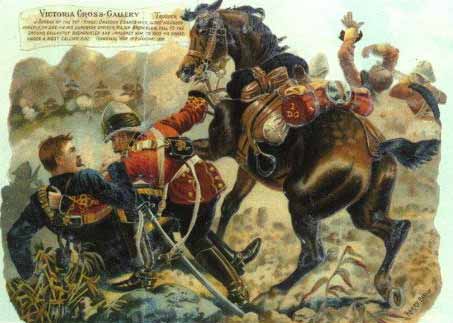 In 1879 the KDG fought in the Zulu War. Major Marter of the KDG led a patrol after the battle of Ulundi which captured the Zulu King, Cetewayo. Part of the regiment also fought in the 1st Boer War of 1881 where Private John Doogan won the Victoria Cross at the battle of Laing’s Nek.