A Legacy of Loyal Service

A regiment is much about people and their character; character that has been honed by training, fear, loyalty and bravery, fashioned and hardened by war.

Saint David’s Day 2006 saw the formation of a new regiment in the British Army called ‘The Royal Welsh’.  This change of structure in the infantry for Wales united the regular and cadet battalions of The Royal Welch Fusiliers and The Royal Regiment of Wales (24th/41st Foot) and the territorials of The Royal Welsh Regiment.

The occasion was marked by a ceremonial march-past of the City Hall in Cardiff, where the Right Honourable The Lord Mayor, Councillor Freda Salway, with Regiment’s new Colonel, Brigadier RJM Porter MBE, took the salute.  In all, 900 Regular and Territorial Army soldiers, cadets and comrades paraded with their Colours, Branch Standards, the regimental goats, the pioneers, bands and drums.  A forecast of poor cold weather meant that the focal point of the day, a Regimental Muster around a Drumhead Service, was held indoors in St David’s Hall, rather than the more public Roald Dahl Plâs as planned.  This poignant service was conducted by the Army’s Chaplain-General assisted by the Brigade and Battalion Chaplains.  The service was an opportunity to give thanks, before Almighty God and the people of Wales, for the antecedent regiments; for their traditions, their ethos and the men who have served so faithfully down the years.  It was also a chance to remember and honour sacrifices they had made in times of conflict to ensure peace. 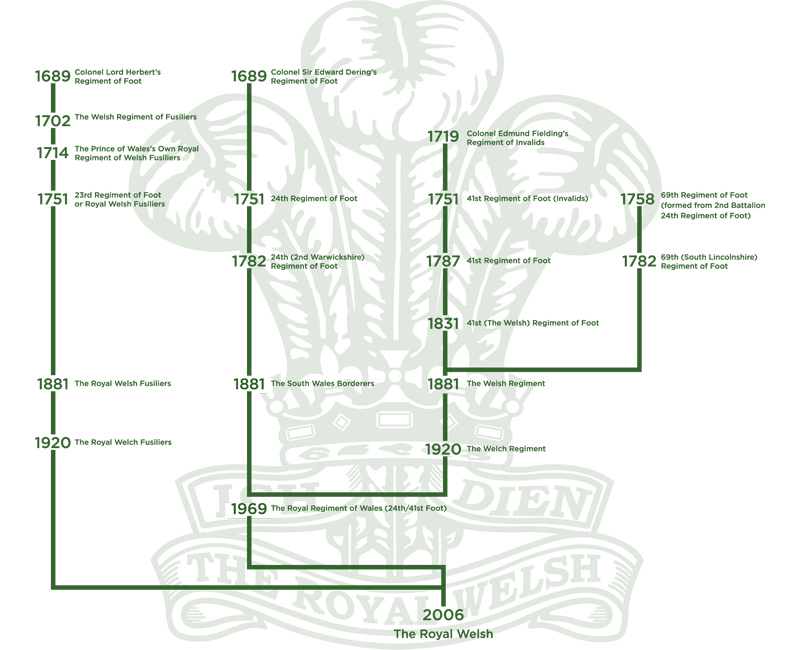 Raise a Regiment of Foot

The antecedent regiments have a history and heritage that goes back over three hundred years.  They were first mustered within days of each other in March 1689, when King William III, in a single commission parchment, charged Lord Herbert of Chirbury and Sir Edward Dering each to raise a regiment of foot for service in Ireland.   Since those early days, these regiments have participated in many of the significant events in British history.

Over the years, these regiments’ titles have evolved to meet changing roles and national needs.  The significant contribution by its soldiers in the two World Wars will alone ensure the names of the 23rd or The Royal Welch Fusiliers, 24th or The South Wales Borderers, and 41st or The Welch Regiment will live in the hearts and memories of many people, particularly those in Wales, for a very long time.  The last of the territorial battalions of the Monmouthshire Regiment, inextricably part of the Corps of the South Wales Borderers, disappeared in 1967.  For the Great War, the collective figures for these four infantry regiments appear incomprehensible today with 250,000 men serving in 105 battalions, gaining 106 Battle Honours, at a cost of 25,886 lives with many more soldiers maimed and disabled for life. In 1969, tinged with much sadness, the South Wales Borderers and the Welch Regiment amalgamated to form The Royal Regiment of Wales.

A glance at The Royal Welsh’s history underlines the richness of the fighting heritage of the regiment.  There are numerous instances where the antecedent regiments found themselves fighting side by side, in Marlborough’s campaigns, in the Crimea, at Mametz Wood in the Great War and in bringing freedom to the Dutch city of ‘s-Hertogenbosch in 1944.  Throughout time individual officers and soldiers have been inter-posted between regiments contributing to a strong blend of mutual comradeship and understanding.

The Royal Welch Fusiliers distinguished itself in many campaigns; of note are Minden in 1759, Yorktown in America, Albuhera in the Peninsula, the seizing of the Great Redoubt at the Alma in the Crimea, the Relief of Lucknow during the Mutiny in India, the unique Honour gained after the Boxer rebellion in Peking and their heroic stand in 1944 at Kohima on the borders of India.

The South Wales Borderers, who are closely associated with Brecon and its Cathedral, are perhaps best remembered for Marlborough’s campaigns when the Duke was their Colonel, the American war of Independence, in the Peninsula at Talavera, and in the Sikh wars at Chillianwallah.  Its involvement in the Zulu campaign was both tragic and glorious; Isandlwana and Rorke’s Drift are likely to be remembered for a long time.

The Welch Regiment, formed in 1719 as a Regiment of Invalids for garrison duties, went on to distinguish itself in a wide variety of campaigns, most notably in Canada, the Napoleonic wars (in which elements served at both Waterloo and with the Royal Navy as naval infantry), in the Crimea, not to mention the two world wars and afterwards in Korea.

In more recent times, soldiers of the Royal Welch Fusiliers and the Royal Regiment of Wales have played a vital role during operational tours in Northern Ireland, the Balkans and in Iraq, gaining many honours, individual awards and much praise for their steadfastness and professionalism, combined with their typical Welsh humour and sense of fair play.  These attributes were soon tested after formation, when both regular battalions, together with a number of territorial soldiers from 3rd Battalion, were deployed to Afghanistan and Iraq in 2007.

The regiment has gained 244 Battle Honours, far more that can be displayed on the Colours, and 43 of its soldiers have received Britain’s highest award for valour – The Victoria Cross.  But above all else, the regiment has today a strong sense of identity with Wales and its people, which gives all its Battalions (regular, reserve and cadet) a distinct flair and esprit de corps.  It is predicted that The Royal Welsh will emulate the fine standards and traditions of its gallant forebears, to make it one of the finest regiments in the British Army.

This article can only give an introduction to The Royal Welsh’s rich history.  The evolution of antecedent regiments, in particular the volunteer and reserve battalions, is too complex to be covered in any depth here.  For those who desire greater detail, there exist some very comprehensive and readable regimental histories.  The regiment’s three fine museums at Brecon, Caernarfon and Cardiff can also help in this regard and are well worth a visit.